Should you zip your precache assets?

Precaching is a term that's being used to describe the process of downloading files during the installation stage of a service worker, which are then added to the Cache Storage (for offline use, for example).

I came across an interesting idea lately, where instead of downloading your precache assets individually, you would package them into a zip archive, download it in the service worker where you unzip and add each file to the cache manually. 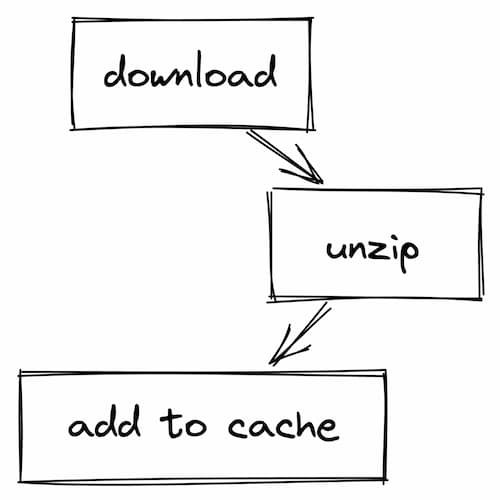 This might have a few advantages as well as some disadvantages:

I came across this pattern as part of the Service Worker Cookbook and was wondering if there was any significant performance gain from doing this instead of the "vanilla" way of doing something like this:

Let's stick to calling this the "vanilla" approach. As for the alternative, let's call it the "cookbook" version. Here's a rough idea of how it works:

In the cookbook version, the service worker carries a dictionary for looking up Content-Types by file extensions:

To construct the path to where the actual asset is stored, the following function is shipped along with the rest of the service worker code:

Glued together, this approach looks pretty much like this:

Let's take a moment to talk about compression. zip is compressing using deflate by default. Since I plan on serving my assets with the Brotli compression, this is not a fair comparison. So, I added a third approach which I'll call the "zip of brotlis", where I run all precache assets through Brotli, and then zip them using no compression (zip -0 or zip --compression-method store). This should result in an even smaller archive, due to how good Brotli is. However, this means also shipping code capable of decompressing Brotli in the service worker. The "zip of brotlis" version also slightly differs from the cookbook (pure zip) method in that it also includes a meta.json file which carries along the Content-Type and path of each asset. This removes the need of having to guess based on file extension. This is how I constructed the meta.json file:

This results in three approaches in total. So, I set up a benchmark to test out some scenarios. Here's my setup for comparing the approaches:

For all of my tests I stuck with the following list of assets, which I believe to be a reasonable representation of modern web development practices. I chose a few small SVG icons, React/ReactDOM in their minified production version as well as all of TailwindCSS, fully minified. Along with those resources, I added the Roboto web font in its woff2 version, in regular and 700 weight. Lastly I included an offline.html page. These are their respective file sizes:

The woff2 files are unchanged because woff2 uses Brotli as its compression anyways.

In total, this sums up to the following sizes:

To reduce as much latency as possible, I set up a server in my local network, on a Raspberry Pi 4 to serve static assets as well as the zip archives. I had to jump through some hoops here to get HTTPS working, since Firefox only supports Brotli over HTTPS. I tried serving the assets from a server running on localhost, but this impacted the benchmarking tool I was using in combination with throttling the network speed.

My local machine (running the tests itself) is a 2019 MacBook Pro with the following specs:

To emulate real world network conditions, I used throttle with the following profiles:

I'm going to test the big three engines: Blink (Chrome), Gecko (Firefox) and WebKit (Safari). By using tachometer to benchmark in different browsers I'm trying to see if there are any differences between browsers themselves (even for the same approach). This might catch some browser quirks. During some experimenting, I noticed Safari has really fast cache writes in some cases.

Assuming that there is no significant performance difference between running the code in a service worker or on the main thread, I set up the tests in a single HTML file like this:

As mentioned above, I purposely excluded the cache.put() operation, as Safari is somehow significantly faster. This should not affect the comparison, as all approaches would need to execute it. Here's the results:

Overall, it looks like browsers are behaving similarly for the same approach. The cookbook version seems to be much worse on slower network conditions, this can probably be attributed to the extra bytes of the archive, since Brotli isn't used here. Only for the 4g profile, it seems that the zipped Brotli version beats the vanilla approach, which seems weird but could be an error in my benchmark. There also seems to be pretty much no difference between the 50k and 100k versions.

So, should you zip your precache assets? Well, probably not, browsers are actually pretty good at downloading multiple files in parallel, as well as decoding them. But if you really wanted to, use an approach similar to my "zip of Brotlis". Also, all of these tests were run on a relatively new MacBook Pro with a good CPU, so these results would look different on devices with weaker CPUs, potentially proving the vanilla version to be even better. You should probably also use some sort of RUM (Real User Monitoring) to track and measure how these choices actually impact your users. This usually gives you a better picture than purely synthetic tests or benchmarks.

I might also have screwed up somewhere and my benchmark is flawed. I have set up a GitHub repo with all of the examples and the benchmark itself, if you want to check it out. An aspect which might be interesting to look at is how the size/amount of precache assets impacts the performance. Also, the Web Package specification mentions a similar approach, which could be further explored.

In case you didn't know, v8 uses a heuristic to automatically store the optimized, compiled bytecode version of scripts that are added to the cache during service worker installation. All of the approaches mentioned here keep this benefit.

One main takeaway from all of this is that you should probably just use good compression. Brotli is incredibly powerful at compressing files, and since all modern browsers support it, you don't even have to ship your own client-side Brotli library.